Sant Jordi is, without a doubt, one of the most memorable festivities in Barcelona and it’s highly recommended to anyone that has the possibility to visit the city during this day. To sum up, its uniqueness is due to the fact that the whole town is full of joy and love and everyone comes together to celebrate this day.

Sant Jordi’s Day (aka St. George’s Day in English) is one of the most important holidays in Catalonia. It takes place on April 23rd and it’s also the equivalent to lovers’ Day in Catalonia (alternative St. Valentine’s Day). Traditionally, couples express their love by exchanging a rose for the women and a book for the men. During this day, La Rambla, Passeig de Gràcia, Plaza de Catalunya and La Rambla de Catalunya become full of book and flower stalls. 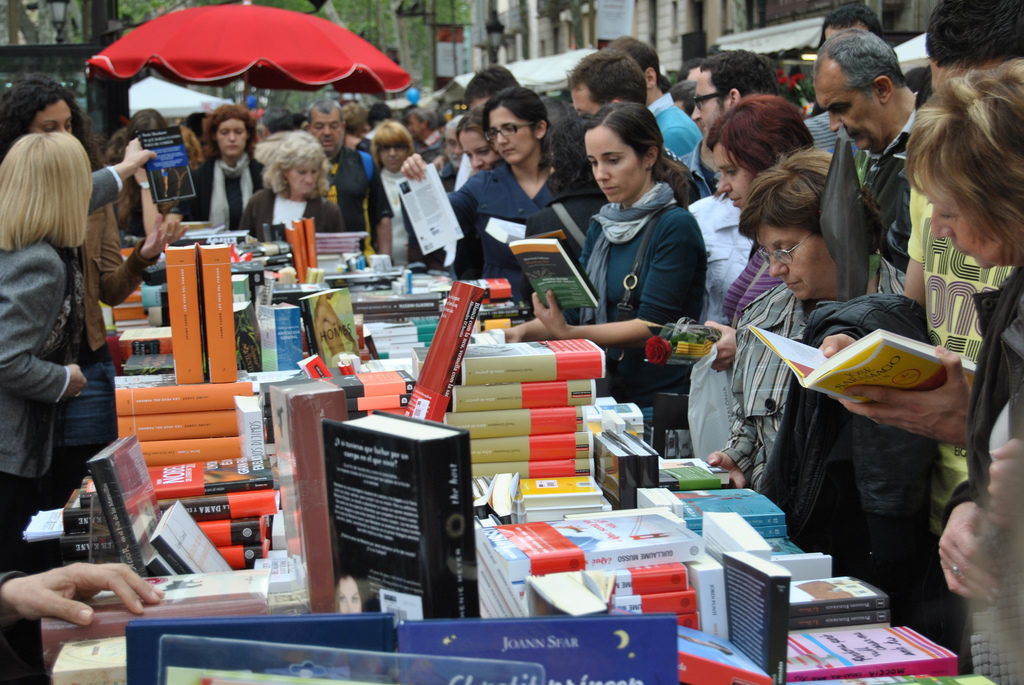 A point that is often overlooked is that in Catalonia, they celebrate two different holidays on the same day. In fact, on April 23rd it is also the World Book Day, which is celebrated internationally.

The celebration of this day dates back to 1923. Multiple booksellers in Spain decided to start celebrating this day in honor of the Spanish author Miguel de Cervantes, who died on the same day back in 1616. Furthermore, it was in 1929, when the International Exhibition was held in Barcelona that the booksellers decided to create stalls in the streets to present their publications. The initiative was so successful that they decided to change the date and define 23rd April as the Book Day in Spain. So, as you can see, this day has been celebrated since the 16th century but it was only in the 19thcentury when it became the most celebrated cultural and patriotic day in Barcelona and Catalonia.

Many years later, in 1995, UNESCO’s General Assembly declared April 23rd as the World Book Day, because it also happens to be the day when William Shakespeare died.

The legend of Sant Jordi:

This celebration in honor of Sant Jordi goes back centuries. The famous legend of Sant Jordi tells the tale of a surprisingly multifaceted Roman soldier that is the perfect representation of a Christian martyr, a dragon slayer and a model of chivalry, all in one.

The story starts with a hungry dragon that lived in a village, who ate an animal every day. When there were no more animals in town, the dragon started eating the people of the village. One day, the Princess was put in dangerous when the dragon decided to attack her. So a brave and handsome boy (known as Sant Jordi) killed the beast with his spear and saved the princess. But from the blood of the dragon a rose was born. Hence the tradition that persists to this day of giving roses to women.

Finally, it is interesting to mention that Sant Jordi has been the patron saint of Catalonia since 1456.

The meaning behind the colours:

Where to buy your flowers:

During the day, all the florist and plant shops of Barcelona and Catalonia will be selling roses. You can also find people and stalls selling roses in the streets. Many of these people are students trying to make some extra money for their summer vacations or organizations trying to get some extra funds. The prices of the roses may vary from place to place, and at the end of the day the vendors usually have some good deals and discounts.

The “Lotería de Cataluña” decided this year to do a whole campaign for Sant Jordi, in which the creative concept is a parody of the romantic idealism and how a couple can fall in love and become rich with “La Grossa”.

You can buy your lucky ticket in one of the 2.100 places that already sale the “Lotería de Cataluña”. The draw of “La Grossa de Sant Jordi” will happen on the next April 27th, which also happens to be the 30th anniversary of the “Lotería de Cataluña”. The reward will be around 12 million euros and each ticket costs 5 euros in paper. In total there will be 5 prices. Try to be one of the lucky one!

The bakeries and pastry shops in Catalonia decided a few years ago to also participate in the festivities, by creating a special bread, the Pa de Sant Jordi. This bread contains “sobrassada” (a raw, cured sausage) and cheese. In the end it looks like the flag of Catalonia. Perfect as snack!

Here you can find the best tips to avoid being stuck in the middle of the chaos that is Sant Jordi.

Start early morning with a stroll around the bottom of La Rambla, next to the statue of Christopher Columbus, and start going up the avenue. Supposedly around this time, there shouldn’t be a lot of people and that way you have an opportunity to check the first book stalls.

Continue until you find the Plaza Real, where you might find some cultural activities related to the day. Later try to find the Rambla de les Flores, where the usual flower stalls are and they look extra beautiful and colourful during Sant Jordi.

Some places are open to visit, even if it is a Sunday: Biblioteca Nacional de Catalunya (Calle Hospital), Ayuntamiento de Barcelona and Palacio de la Generalitat (Plaza Sant Jaume), Palau Güell (Carrer Nou de la Rambla), Ateneu Barcelonés (Carrer de la Canuda) and Recinto Modernista Sant Pau (Carrer de Sant Antoni Maria Claret). Keep in mind that some of this building only open of this occasion, so take this opportunity and visit them!

To conclude, let’s just say that for those that are fortunate enough to come to Barcelona during Sant Jordi, they should seriously think about prolonging their trip to enjoy the rest of Semana Santa.